Steve S. posted his first build of "Elementary", a watchface that uses the periodic table of the elements (plus a special element with no protons called "Voidium" or "Vo") to tell the time.

I don't think his screen shots he included with the posting do the watchface justice, so try it on your WIMM One before passing too much judgement. It needs some polish in a few areas. With some effort in transitions and customization, this could really be a seriously cool watchface.

Get it here. Keep up the good work Steve!
Posted by Brad Hutchings at 6:45 AM No comments:

Teller (the less boisterous half of the magician duo Penn & Teller) has written a must read article for any developer wanting to write great software for the WIMM One. In this article, he reveals a few of his key secrets for making magic work.
One important secret is to use the resource that most people won't: time. A trick that lasts 30 seconds in front of an audience may take weeks or months or even years to prepare. The "magic" here is that most people wouldn't use so much time to prepare a 30 second illusion.

That got me thinking a lot about what I enjoy about developing watchfaces for the little WIMM One. Per the Micro App Guidelines, a great Micro App (or watchface) is characterized by providing rich, timely information in short glances.

For the most part, the information itself is pretty easy to get. Ask the system what time it is, or lift code from the network sample to query some resource on the web. But presenting that information in an attractive, polished way to the user may take days or weeks of development to deliver "magic" interactions to your users.

For example. the basic functionality (display time in various formats, procrastinator watch) of my first Alltock Christmas watch took me about 4 hours and two glasses of wine late one Friday night. Adding a snowstorm took a couple hours the next afternoon. It was a week or so before the Advent calendar countdown was suggested by a friend. And it's been three months of refinement of the presentation and interactions.

Another example... The side columns of my Alltock Monogram watchface came together in a couple of hours after seeing a suggestion for an "elevator watch". Even some rich animation of the minute column in active mode and transitional effects from passive mode were pretty easy. But it took a couple of days of constantly using that watchface and being annoyed by the space in the center for the monogram idea to gel. At one point, I thought an animation of a two-lane highway in the center would be the ticket. And it took a lot of feedback from my first audience to know that, for example, the minute column animations were over-the-top, even distracting and disconcerting.

Be inspired by Teller. The resource you can use to your greatest advantage in developing your Micro App is the time you spend polishing and refining it. There aren't gazillions of developers in this space yet, and even when they arrive, are they going to have the time to out-polish and out-refine you on your app? If you put enough in, probably not.
Posted by Brad Hutchings at 7:04 AM 1 comment:

By now, everyone knows that the Micro App Store Beta is up and running. As an early adopter, you can get some cool apps and watchfaces for your WIMM One totally for free!

There were plenty of stories around the Internets announcing this important milestone. Perhaps the biggest business hurdle that the WIMM One faces is a perception that it's just copying the iPod Nano, as discussed in the comment section of this story. But remember, WIMM's mission statement is not centered on a 1" square touch screen computer and watchband. It's about wearable technology, and will always exploit the differences between luggable (your laptop or tablet), carryable (your phone), and wearable (your watch).  WIMM is also about nurturing and cultivating a strong crop of third party developers, who will provide much if not most of the software value for the product. Thus the importance of the  Micro App Beta Store.
Posted by Brad Hutchings at 7:47 AM No comments:

In the WIMM forums this week, Ted L. posted an idea about an elevator watch. It inspired me to do something entirely different. And the result is Alltock Monogram. It has an hour dial on the left and a minute dial on the right. Your two letter monogram, which you can set, is in the center. There is a choice of three color schemes now.

With this watchface, I tried to make the transitions really fluid. I still have some work to do, but I think you'll notice the startup animation and the screen wake animations as examples of that fluidity.

You can grab it from the forums.
Posted by Brad Hutchings at 1:01 AM No comments:

Alice Truong at USA Today posted an article and short video about how Android is branching out from phones and tablets. Example #1 is the WIMM One watch, and her favorite apps are the calendar and the RSS reader.

It's great to see mainstream coverage of the WIMM One with context about how it fits into the growing Android ecosystem!

Note: Ms. Truong is not aware that the developer kit can be had for just $199 over at Amazon.com.
Posted by Brad Hutchings at 10:54 PM No comments:

Over on reddit, zagaberoo (aka Mike) posted an interesting tutorial on reading a binary watch like the one he made for the WIMM.

Pretty cool Mike. I'll review this when I get a chance.
Posted by Brad Hutchings at 11:06 PM 1 comment:

For the WIMM: Kinect Motion Detector and Alarm

For the WIMM is a new blog segment I just came up with, inspired by this video. This guy Paul, apologized for not focussing on a health and fitness app and then came up with amazing integration with the Kinect, which he demonstrates in the video.

Obviously, there's a lot of work to make the experience perfect for the watch... But could you imagine simply deploying a Kinect in ever room in your home and being alerted when the kids get home or something is amiss? Pretty nifty.

The Los Altos Town Crier (no relation to Two and Half Men straight man and 80s teen angst movie star John Cryer) has a feature on local business, WIMM Labs. The article is a nice introduction to the company's seasoned leadership and has an interesting strategic note at the end. While the company has mostly talked up the licensing strategy to date, they're also developing cases for the module most suitable to the activity at hand. Interesting!

Read it here.
Posted by Brad Hutchings at 6:27 PM No comments:

Ready to put Valentines Day behind you? Well, we just put Alltock Shamrock up on the forums so you can get a head start on St. Patrick's Day. 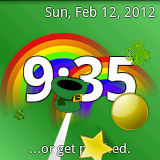 Yep, that's a real double rainbow on your WIMM One! We added one small feature to the Alltock engine this time around. In addition to sweep and arc displays for the second hand, we now have a "tick" display. Swipe left to right to cycle through these modes.

You can get our first build from the forums.

Enjoy!!
Posted by Brad Hutchings at 9:45 PM No comments:

Great news for developers who want to win a WIMM developer contest. They have extended the submission deadline for the health and fitness apps contest to Sunday, February 19, at 23:59 PST. They are offering free WIMM One devices to developers who submit a good enough app (see official description at the link) and two $250 Amazon giftcards.

I will call a shot right now. It might be my shot if I can make enough time, but someone else might do it better. An app that helps people manage pills -- what to take, when to take them -- will kill this contest. I am over at my 89-year old grandparents' home this morning. My grandfather has a list in roughly 16 point  font of all the meds he has to take during the day. It is almost a page long. They are very conscientious with their meds, but I bet the error rate on taking them is better than 10% – meaning they either miss or double dose at least 1/10 times.

There is a description of such an app in the ideas forum at the WIMM site. As a bonus, it needs a feedback component. User should be able to say they skipped a dose and have that recorded. There are many drugs where the doctor would like you to take it, but if you can't, that's useful information.

Of all the ideas shared there, I think this general one has the best chance of giving a very good, dedicated developer a very comfortable lifestyle if WIMM has good fortunes ahead.
Posted by Brad Hutchings at 11:53 AM 1 comment:

Josh Smith delivered on his promised article about that WIMM One that he's wearing now while reviewing watches that don't even exist yet. He's got some great videos in here, like the one I poached at right. As one commenter suggested, if tech blogging doesn't work out, maybe he has a future as a hand model. (And no, that's not a Rex Ryan joke.)

HT: serchend in the comments for finding this right away!
Posted by Brad Hutchings at 4:45 PM 2 comments: Josh Smith at GotteBeMobile.com teased an upcoming article on the WIMM he is wearing now in an article about a concept iPhone watch he won't be wearing for a long time. Yeah, the irony. The article hasn't appeared yet, but I'll let you know when I see it.

Rodney, for no respect!
Posted by Brad Hutchings at 10:52 AM 2 comments: